When the Heavens Opened 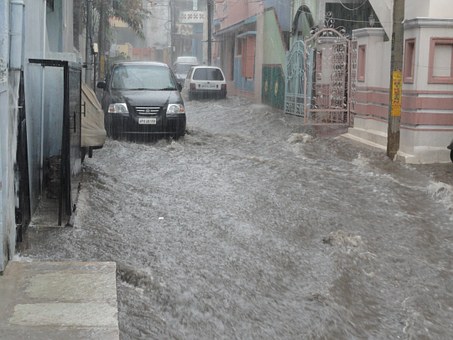 In early July, a morning storm dumped over 4 inches of rain near Arlington, Virginia. Floodwaters rose when the heavens opened.

According to The Baltimore Sun, water levels at Cameron Run in Alexandria, Virginia, rose more than 7 feet over 30 minutes. In Montgomery County, Maryland, emergency workers responded to dozens of rescue calls, using boats to rescue people from flooded cars.

Drivers had to swim to safety, as roads turned into rivers.

Basements across the Washington region were flooded, including the basement of the White House. Water flowed into the underground press workspace of the West Wing. Government employees used wet vacs to remove puddles of standing water.

Flooding also closed the National Archives, although the Declaration of Independence and other priceless documents were protected from damage. Every building in the path of the storm was in danger, when the heavens opened.

The flash flooding “was beyond dramatic,” said WTOP’s Dave Dildine. “It was downright scary.”

I am currently writing the sequel to City of Peace, a novel that will be a second “Mill Street Mystery.” The story begins with a devastating flood that does terrible damage to Occoquan, including the destruction of a small building containing a candle shop and an apartment.

In the wreckage of the building is found the disfigured body of a young Latino with numerous tattoos and a crude and bloody carving of Satan’s claws.

Harley Camden will return in this book called Windows of the Heavens, as will a number of characters from City of Peace. Together, they will try to uncover the forces behind the young man’s violent death and the town’s terrible flood.

As the story begins, rain pounds on the roof of Harley’s house, bangs on the windows, and rattles down the gutters, all through the night.

Harley rubs his eyes and goes to the window on the west side of his bedroom. When eyes adjust to the darkness, he sees something surreal. Union Street, which runs from Commerce down to Mill Street, has become a river.

A torrent of black water, several feet deep, is running toward the Occoquan River, swelling and rolling like a flood. It rips merchandise from the porches of the shops along the street, and even causes parked cars to rise up, spin around and crash into buildings.

Harley thinks he hears a train. But then he realizes that the sound is being made by the water as it roars through town.

He finds himself short of breath. He is frightened by what he is seeing but also awestruck, witnessing a force that can destroy anything in its path. A line from Genesis comes to mind, “The waters swelled so mightily on the earth that all the high mountains under the whole heaven were covered.” Surely an exaggeration, he thinks. But one that matches the wild and roaring floodwaters in front of him.

The windows of the heavens had opened, and the Town of Occoquan was being destroyed.

When have you seen such destruction, and what can human beings do about it? Join the conversation through a comment below.