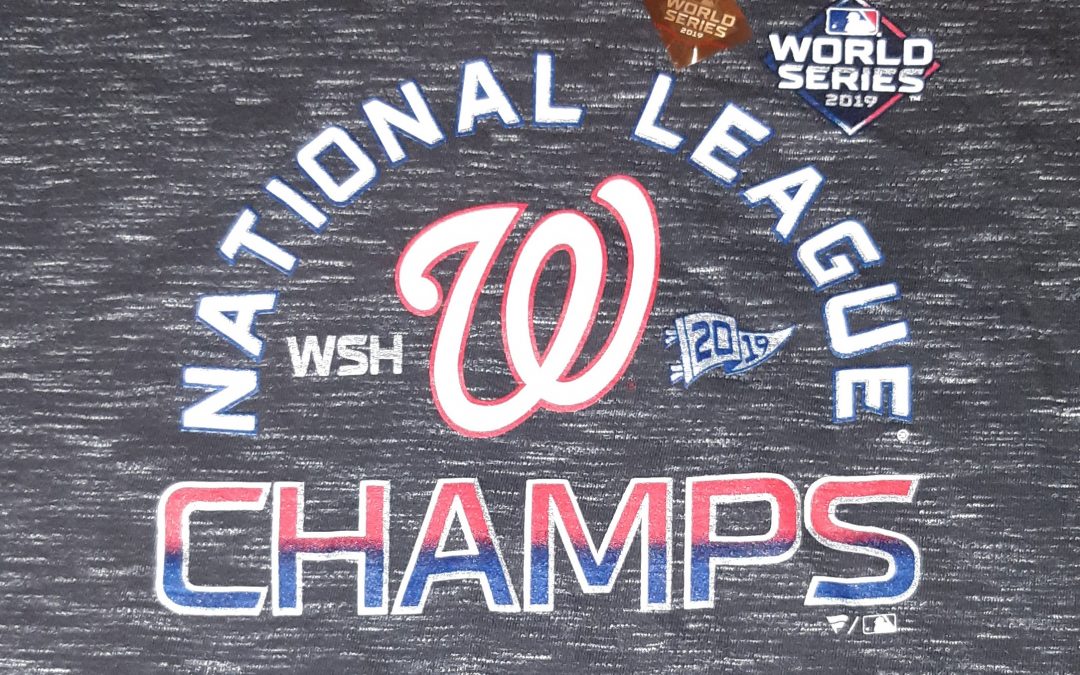 We live in a fractured and polarized world, with people driven apart by race, culture, politics and religion. But baseball builds bridges.

The Washington Nationals are the 2019 National League Champions, winning a pennant for their city for the first time since 1933.

I was happy to be in the ballpark with my son Sam when the Nationals won the Championship Series with a 7-4 victory over the St. Louis Cardinals. Their trip to the World Series is a thrilling turn of events for a club that had a terrible start to the season, and only made it into the playoffs by winning the Wild Card game.

Sam and I were high-fiving strangers as the Nats scored all seven of their runs in the first inning, and then we had to suffer alongside our neighbors as we watched the Cardinals try to even the score. The sell-out crowd was full of Republicans, Democrats, blacks, whites, immigrants and native-born Americans. But that night, we were all Nats fans. Baseball builds bridges.

Up the street at the Capitol, lawmakers were focused on an impeachment investigation of President Trump. And at the Supreme Court, the justices were pondering Puerto Rico’s financial board.

But at Nats Park, all that mattered was winning a baseball game.

The game was “the best baseball victory in D.C. since 1933, another era when America seemed chest-deep in problems,” wrote Thomas Boswell in The Washington Post. “In October 2019, Washington is united behind one flag and one purpose.” Baseball builds bridges.

For the Nats, unity does not mean uniformity. Boswell points out that the team enjoys tremendous diversity, with eight key players from Venezuela, Brazil and the Dominican Republic. They also have a wide range of ages, from 20-year-old Juan Soto to 36-year-old Howie Kendrick. There are 18 players past their 30th birthday, leading 35-year-olds Ryan Zimmerman and Max Scherzer to call themselves “Los Viejos” — the Old Men.

In a tense and divided world, we need the kind of excitement and communal unity that baseball can provide. It’s fun for everyone, from children to “Los Viejos.”

Barry Svrluga quoted the Nats’ manager Dave Martinez in the print edition of The Washington Post. “I want them to have fun,” Martinez said of his team on the day they won the championship. “I want them to be loose. Like I said before, we’re not here solving the world’s problems. We’re here playing a baseball game.”

Baseball also helps to keep the world’s problems at bay in my novel City of Peace, even as it brings diverse people together. One summer day, pastor Harley Camden was cleaning up his boat for an afternoon trip to watch a Washington Nationals ball game that started at four o’clock. It was a church activity, one that he had announced from the pulpit and opened up to anyone in the congregation.

Retired military man Dirk Carter had signed up, as had the town maintenance man Tim Underwood. Mary Ranger, the postmistress of the Occoquan Post Office, was enjoying a day of vacation and joined the activity with her husband, Paul. They brought their three elementary-school-aged granddaughters, who were staying with them for part of their summer vacation.

Harley was happy to have his boat full of people, especially on such a lovely summer day. He realized that a large part of his anger over the past year was grounded in loneliness.

“Dirk, how is your music going?” asked Tim.

“Not bad. I feel like I’m not drawing the crowds I used to, but Maxine’s still likes to have me.”

“Well,” said Tim. “Occoquan is changing. There are not as many white people as there used to be, natural fans of country music.”

Dirk nodded. “Yes, that’s true. A lot of changes going on. Not all of them good.”

“You Republicans used to be change agents,” Tim said. “Now you are change resisters.”

Dirk turned in his swivel chair and faced forward along with Harley. “They think I’m a dinosaur, but I’m not. I just value tradition.”

“Did I tell you I went to the hospital?” said Dirk, out of nowhere.

“Chest pains. Really excruciating. Spent a night in the hospital.”

“Yeah, the docs aren’t exactly sure what happened. The good news is that I didn’t have a heart attack.”

“Well, that’s great,” said Harley. “Thanks for informing your pastor, so he could visit.”

“Look, I don’t need any hand-holding.”

“Still, I would have liked to visit. It’s my job.”

The boat pulled up to the dock outside Nationals Park in time for the first pitch, and the group had a great time watching the Washington Nationals beat the New York Mets, four to three. Harley enjoyed seeing the little girls enter the ballpark for the first time, eyes wide with amazement at the size of the park, the deep green of the field, and the bright lights of the digital scoreboard.

Their trip home on the boat was uneventful, and they tied up in Occoquan just as the sun dipped below the horizon. Harley said goodbye to everyone, and Dirk stayed behind to help him put the cover on the boat.

As he left, Dirk said, “Harley, thanks for your concern about the hospital thing. I’ll tell you when I really need you.”

When have you found that baseball builds bridges, or that some other sport showed the power to bring diverse people together? Join the conversation through a comment below.