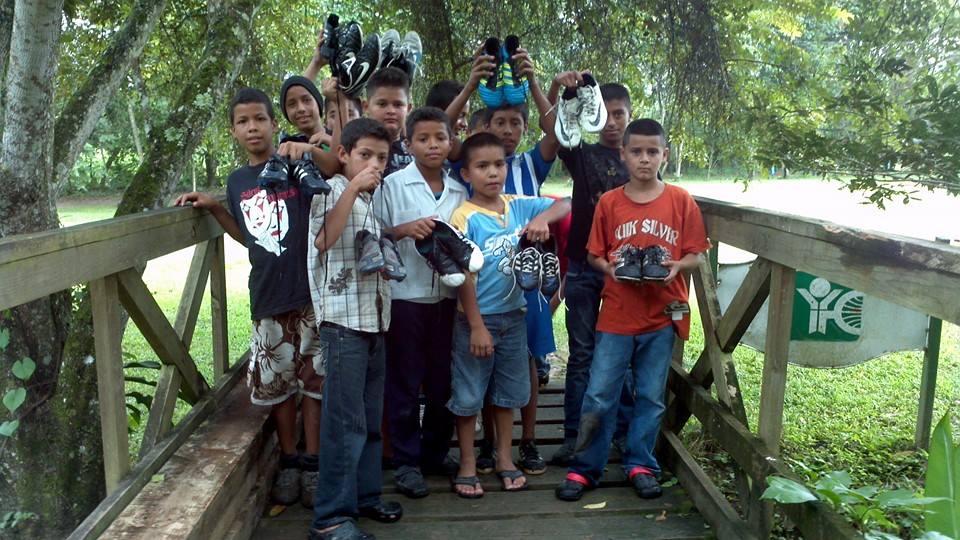 I’m just back from my church’s annual mission trip to Honduras, in which we do construction at a Christian camp for youths and perform medical care at a clinic in the city of La Entrada. Honduras is one of the poorest countries in Latin America and has one of the highest murder rates in the the world. But our group always benefits from its mission to Honduras.

Our partners in Honduras are some of the most loving and faithful people we know, and we enjoy working beside them. But they face enormous challenges.

“Crime is in part an outgrowth of extreme poverty,” says Thorpe. About 60% of the country lives on less than $2 per day, the World Bank’s threshold for extreme poverty.

Unemployment is rampant. Everyone Thorpe spoke to on a recent trip complained that there are no good jobs. Any time a minimum wage job opens up, hundreds of people line up to interview.

When we do our construction work at the Christian youth camp, we contribute money to pay Hondurans to work alongside us. This may be one of the greatest gifts we give.

Hondurans also struggle with poor health care. The infant mortality rate is among the lower half of countries in the world. Iceland, Japan and Monaco have infant mortality rates that are eight times times better than Honduras. Our team is pleased to deliver medications and provide medical care at a clinic outside the city of La Entrada, serving a desperately needy population.

Drug trafficking is also a huge problem in Honduras because the country is located between narcotics producers in South America and their target markets in the United States. Even in large manufacturing cities such as San Pedro Sula, crime is rampant because of the influence of drug traffickers.

Given the level of violence, poverty, unemployment, poor health care, and drug trafficking in the country, is it any surprise that Hondurans want to move to the United States?

In my upcoming novel Windows of the Heavens, the sequel to City of Peace, pastor Harley Camden embarked on a mission trip to Honduras with a dentist named Bill Stanford, a member of his church.

Bill plopped into a chair in the pastor’s office and spread his long legs. He was a tall guy with red hair, about Harley’s age, who had played basketball at the University of Virginia in the early eighties, alongside superstar Ralph Sampson. He said, “I was driving by and realized I had some Cipro you might want to take to Honduras.”

“It’s a powerful antibiotic,” said the dentist. “Ciprofloxacin, to be exact. Might be very helpful if you get infectious diarrhea on our trip.”

“This stuff will knock out whatever bugs you pick up,” Bill promised, tossing the plastic medicine bottle to Harley.

“So what other meds should I be taking?” asked Harley. “It’s been over thirty years since I was in Honduras.”

“Let’s see,” said the dentist. “You’ve got your hepatitis shots, right? And typhoid. I assume your tetanus is up to date.”

“And you’ll need to take anti-malaria meds,” said Bill. “We’re at a decent elevation, so the mosquitos aren’t too bad. But better safe than sorry.”

“Agreed. Don’t want to come back sick.” Harley remembered that his first dose of anti-malaria medication needed to be taken 10 days before the trip, so he pulled the package out of his desk drawer.

“The real dangers are elsewhere,” said the dentist. “For starters: The roads. They’re terrible. I’ve seen some horrible accidents.”

“And the gangs, Mara Salvatrucha and the Barrio 18. We won’t have any trouble where we’ll be staying, but there are neighborhoods in the big cities that are war zones.”

“Murder capital of the world,” said Harley, shaking his head.

“All driven by drugs. And I hate to say it, but North America is creating the demand that Central America is trying to fill. We’ve got blood on our hands, for sure.”

Harley had thought of Bill as a Christian do-gooder, not particularly tuned into global politics. But then he realized that the dentist had been going to Honduras for a decade, at least. You cannot spend time with the locals without getting a sense of what is going on in the barrios.

“And don’t even get me started on the corruption in Honduran politics,” Bill continued. “The president was losing the election last fall, and then suddenly the vote count was suspended. When it resumed, the president won!”

“And we think we’ve got problems,” Harley said.

“No comparison,” Bill concluded. “But the people of La Entrada need dental care, so I’ll continue to go down there.”

Rising out of his chair, he said, “I’m going to head out. Glad you’ll be part of the trip, Harley.”

Picking up a glass that had an inch of water in the bottom, Harley popped an anti-malaria tablet in his mouth and washed it down. Although he had been telling himself that he was an experienced traveler, he had no idea what he was getting himself into on this mission to Honduras.

What has been your experience with short-term mission trips, in the United States or abroad? What insights have you gained about the struggles of the people you have served? Join the conversation through a comment below.