In a Dream, When Deep Sleep Falls 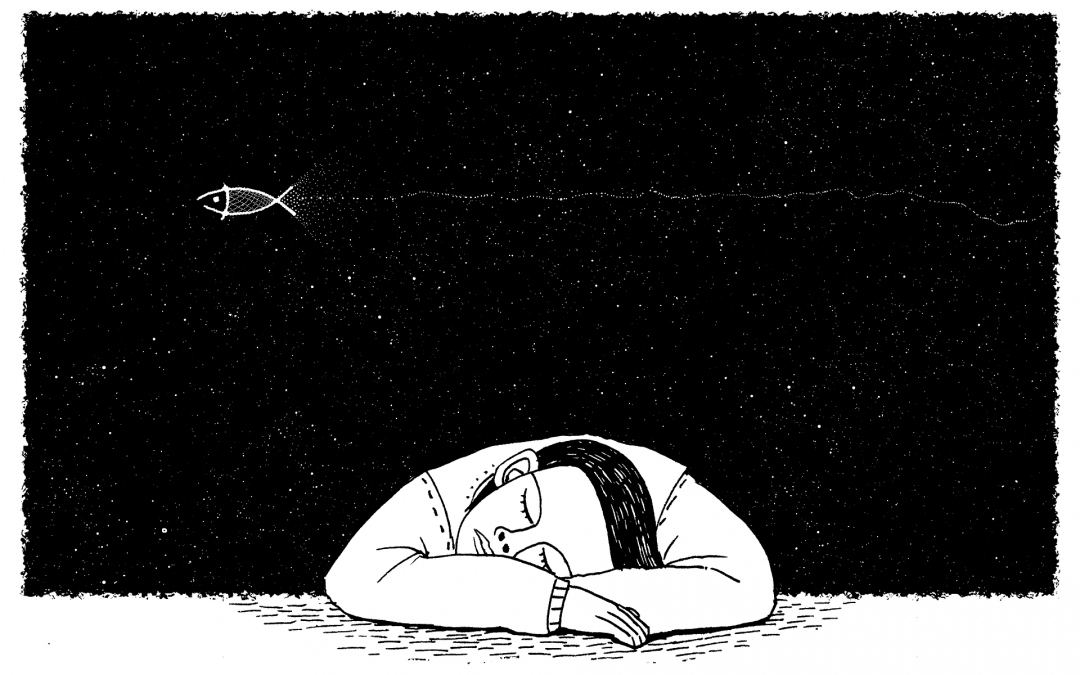 Everyone knows that diet and exercise are important to good health. But so is sleep. Good things happen “when deep sleep falls” (Job 33:15).

Miss a good night’s sleep, and you run the risk of gaining weight, becoming depressed, and increasing your chance of heart disease and stroke. In addition, writes journalist Maddie Stone, you need sleep “in order not to feel like garbage the next day.”

But that’s not all. According to the Bible, you might also miss a message from God.

Recently, a whole industry has grown up around the importance of getting a good night’s sleep. Popular sleep-trackers such as FitBit and the Oura Ring can give you insight into how well you sleep at night.

Of particular importance is REM sleep, in which you experience rapid eye movement. In this sleep stage, your heart rate and blood pressure increase. Your arm and leg muscles become temporarily paralyzed. And most interesting of all: Your brain activity becomes similar to what is seen in wakefulness. This is the stage in which you are most likely to dream.

According to Maddie Stone, “Research suggests that REM and deep sleep together play an important role in memory consolidation and stabilization.”

Skimp on your sleep, and you are certainly going to feel like garbage the next day. But even worse, you are going to miss some valuable dream time, in which your brain does very important work.

One of the most famous dreams in the Bible was experienced by Jacob, one of the sons of Isaac and Rebecca.

The Book of Genesis tells us that Jacob was fleeing his brother after a time of stressful conflict. He came to a certain place “and stayed there for the night, because the sun had set. Taking one of the stones of the place, he put it under his head and lay down in that place” (28:11).

His heart rate and blood pressure increased. His arm and leg muscles became temporarily paralyzed. His brain activity became similar to wakefulness. And he began to dream.

According to Genesis, Jacob dreamed that there was a ladder set up on the earth, and the top of it reached to heaven. The angels of God were “ascending and descending on it” (v. 12).

Weird dream? Absolutely. But as strange as it was, it carried an important message.

The Lord stood beside Jacob in the dream and said, “I am the LORD, the God of Abraham your father and the God of Isaac; the land on which you lie I will give to you and to your offspring” (Genesis 28:13). God promised that Jacob’s offspring would be numerous, spreading to the four corners of the earth, and that all the families of the earth would be blessed in Jacob and in his offspring.

Then God concluded with the words, “Know that I am with you and will keep you wherever you go” (v. 15). God promised to be with Jacob, in every time and place and situation.

During a stressful time in his life, Jacob received a powerful message. God spoke to him in a dream, when deep sleep fell.

Dreams also had an impact on pastor Harley Camden in my novel City of Peace. Stressed, depressed and angered by the loss of his wife and daughter in a terrorist attack in Brussels, he started drinking alone in a recliner at the end of the day, quickly progressing from one drink a night to four. He would nod off in the recliner and be awakened by nightmares. His dreams became more real to him, the place where he could express his rage.

One dream mashed up the Brussels bombing and his seminary study of Dante’s Inferno.

It started with him spiraling down into darkness, flailing his arms and legs in a futile attempt to grab hold of something and stop his fall. He sensed that he was tumbling into hell, but for some reason the temperature became colder as he fell, not hotter.

Finally, he plunged feet first into freezing water, and ice quickly closed around him so that he was trapped up to his waist. His legs were numb, he could move only his arms and head, and in the world of the dream he was convinced that he would be stuck in that dark ice pack forever.

But Harley was not alone. His chest was pressed against the back of a man in front of him—one of the terrorists who had killed Harley’s wife and daughter. Harley could not see the face of the man, but he began to gnaw on the terrorist’s head, chewing through his scalp and skull and beginning to consume his brain. The terrorist and the pastor were stuck in a frozen hell, locked together eternally by their hatred for one another.

When Harley woke, he felt immediate relief that he was not trapped in eternal ice. But he felt no less angry.

Dreams can take us up to heaven, or they can throw us down to hell. But in either case, lessons can come in a dream, when deep sleep falls. Harley Camden continues to dream throughout the novel, and some dreams become a part of his healing.

Has God ever spoken to you in a dream? Have you received a message that had an impact on your life? Join the conversation through a comment below.