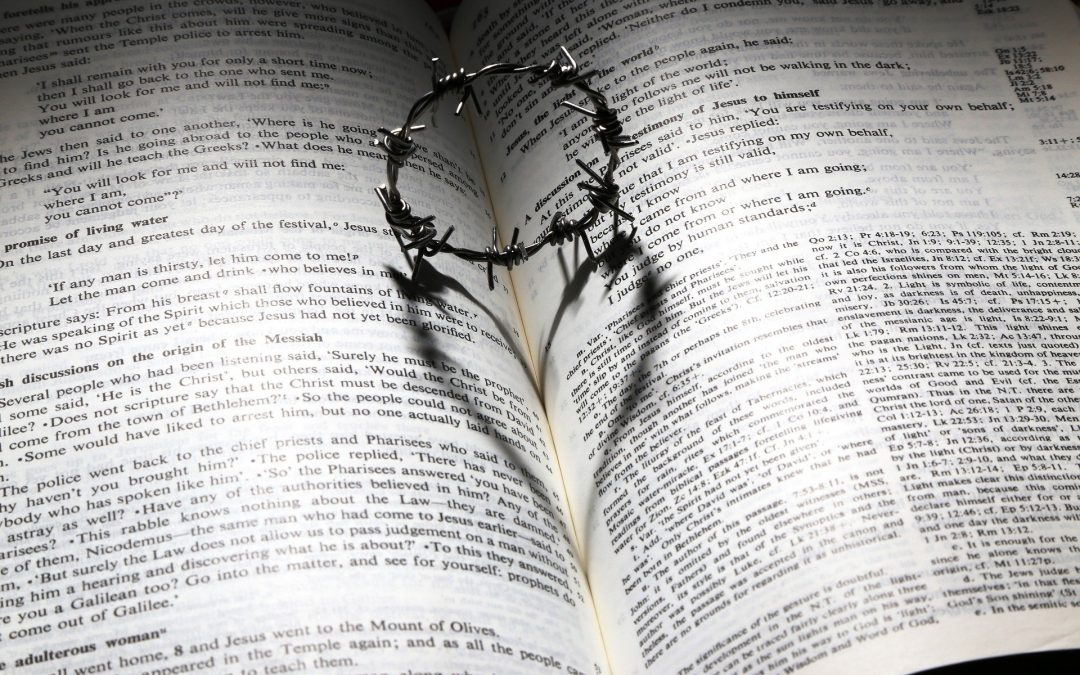 The Gospel of John begins by saying, “In the beginning was the Word, and the Word was with God, and the Word was God” (John 1:1), echoing the creation story in Genesis 1. John’s account of the life of Jesus stands apart from the preceding Gospels, and his first chapter says that “the Word became flesh and lived among us” (John 1:14).

This Word is logos in the Greek of the New Testament, and here it means God’s reason or plan. “From his fullness we have all received, grace upon grace,” says John. “The law indeed was given through Moses; grace and truth came through Jesus Christ” (John 1:16–17).  Jesus reveals God’s reason, order, meaning, and plan for the universe, and shows us the face of God most clearly.

Two chapters later, the most famous verse in the Bible appears, one that Martin Luther called “the gospel in miniature”—John 3:16. In a nighttime meeting with a Pharisee named Nicodemus, Jesus says, “For God so loved the world that he gave his only Son, so that everyone who believes in him may not perish but may have eternal life” (John 3:16). The verse is a precious gift, inviting people of every time and place to believe in Jesus and receive eternal life.

What is sometimes missed, however, is the element of sacrifice that is present in this gift. In the verses that precede John 3:16, Jesus says, “And just as Moses lifted up the serpent in the wilderness, so must the Son of Man be lifted up, that whoever believes in him may have eternal life” (John 3:14–15). The Bible’s greatest hit in the Book of Numbers tells us that in order to save his people from the deadly venom of poisonous serpents, Moses lifts up a bronze serpent on a pole (Num 21:8–9).

In similar fashion, to save all people from the sting of sin and death, Jesus allows himself to be lifted up on a cross. That’s a real sacrifice, one that saves all who look up at him in faith. Jesus goes on to say that God made a sacrifice as well, offering Jesus as a gift: “For God so loved the world that he gave his only Son.” Because of this divine sacrifice, everyone who believes in Jesus “may not perish but may have eternal life” (John 3:16).

If our own sacrifices had to rise to the level of the sacrifice of Jesus, there would be little hope for us. But all God asks is that we put our trust in Jesus—that we believe in him, lean on him, and organize our lives around him. Actions speak louder than words.

That’s why Sierra Trading Post, a mail-order company for lovers of the outdoors, has a bold mission statement: “Our business ethics must be consistent with the faith of the owners in Jesus Christ.” David Rupert of Patheos reports that the Sierra president intends for the statement “to hold me accountable for upholding Jesus’ injunction to treat others the way I want to be treated.”

That’s how people of faith are supposed to do business, in harmony with the loving sacrifice of Jesus. They want to do what is true, “so that it may be clearly seen that their deeds have been done in God” (John 3:21). This passage from John is one of the Bible’s greatest hits because it reminds us that “God so loved the world that he gave his only Son,” a Son who offered himself freely on the cross, so that everyone who believes in him “may have eternal life” (John 3:16).

When we live in gratitude for these sacrificial gifts, and act in a way that is accountable to the example of Jesus, we become people who can show the grace, truth, and love of God to the world.

The above excerpt is from the chapter on John. Written for private devotion and group discussion, the book contains the best in biblical scholarship as well as practical connections to daily life, along with questions for reflection at the end of each chapter. Available in hardcover, paperback, and kindle.