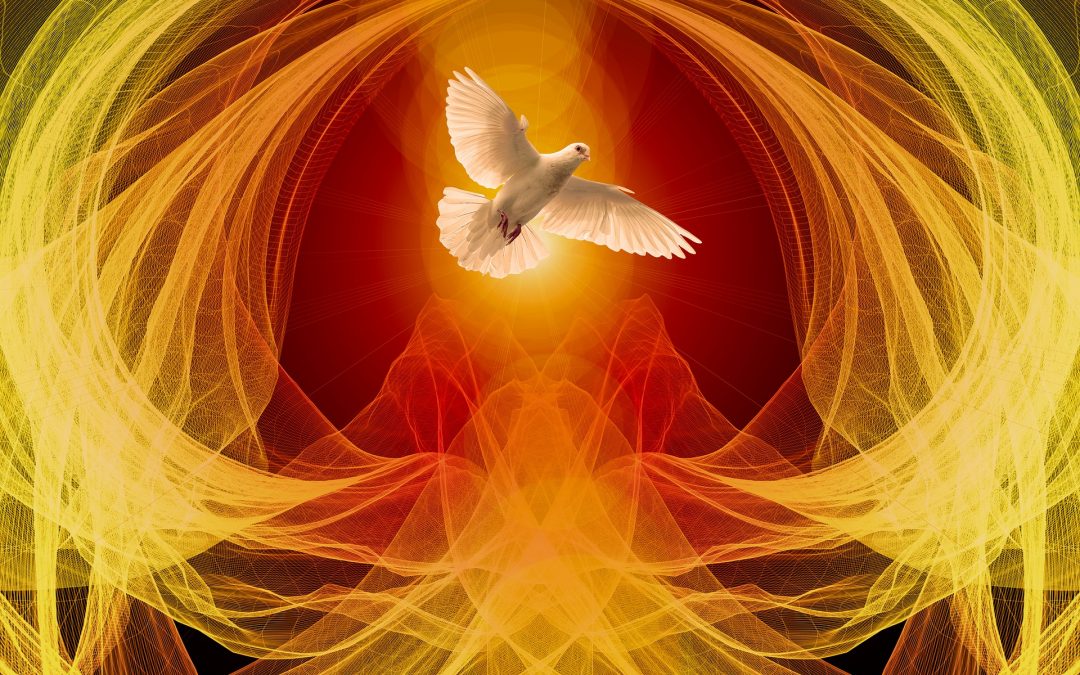 The Book of Acts tells the story of the first Christ-followers, with a focus on the ministry and mission of the apostles, a group of leaders whose title means “messenger” or “one who is sent forth.” The book begins with the story of the ascension of Jesus and then tells of the coming of the Holy Spirit on the fiftieth day after Passover. “When the day of Pentecost had come,” writes Luke, the author of Acts, the apostles “were all together in one place. And suddenly from heaven there came a sound like the rush of a violent wind” (Acts 2:1–2).

God’s Spirit is described as a powerful wind, much like the “wind from God” that swept over the face of the waters on the first day of creation (Gen 1:2).

The first followers of Jesus needed this spiritual power as they faced opposition in Jerusalem, and later in cities throughout the Roman Empire. The sound of wind “filled the entire house where they were sitting. Divided tongues, as of fire, appeared among them, and a tongue rested on each of them. All of them were filled with the Holy Spirit and began to speak in other languages, as the Spirit gave them ability” (Acts 2:2–4).

The Holy Spirit came with the power of wind and fire, and suddenly the international crowd gathered in Jerusalem could understand what the apostles were saying, “because each one heard them speaking in the native language of each” (Acts 2:6). The Holy Spirit enabled them to speak in diverse languages and offer a word of gospel hope.

Such spiritual power is needed today, if Christians are going to be part of a church that brings life, joy, and hope to the world. Peter told the crowd that God’s Spirit was going to change their lives for the better: “Your sons and your daughters shall prophesy, and your young men shall see visions” (Acts 2:17).

New visions are being seen by young Christian radicals such as Shane Claiborne, who writes in Irresistible Revolution, “Jesus says the kingdom is ‘within us,’ ‘among us,’ ‘at hand,’ and we are to pray that it comes ‘on earth as in heaven.’ No wonder the early Christian church was known as the Way. It was a way of life that stood in glaring contrast to the world. Of course, everyone was forewarned that that in this kingdom everything is backward and upside-down—the last are first and the first are last, the poor are blessed and the mighty are cast from their thrones.”

Convinced that the Christian Way is a life-giving way, Shane and a group of friends moved into a small row house in a poor section of Philadelphia in 1997. Their vision was to love God, love people, and follow Jesus, and they began calling their little experiment the Simple Way.

Since then, they have shared food with folks who need it and run a community store out of their house. They have reclaimed abandoned lots and planted gardens in the concrete jungle. They have rehabbed abandoned houses and made friends with people in prison and on death row. Shane and his friends have seen a vision of another way to live—the Christian way. It is inspired by the Holy Spirit and directed toward changing the world for the better.

Men and women have been drawn to “the Way” (Acts 9:2) since the earliest days of the church. They have tapped into a source of power that comes from beyond themselves: A power that is not found primarily in programs, policies, or institutions, but in the Holy Spirit of God. This Pentecost power is an energy source that can keep people burning with love for God and for the people around them, while radiating warmth and light to a cold, dark world.

This passage from the Acts of the Apostles is one of the Bible’s greatest hits because it tells us that the most awesome power for the improvement of the world comes from the Holy Spirit, and that this Spirit gives us both the courage and the ability to connect with people around us in life-giving ways.

The above excerpt is from the chapter on the Acts of the Apostles. Written for private devotion and group discussion, the book contains the best in biblical scholarship as well as practical connections to daily life, along with questions for reflection at the end of each chapter. Available in hardcover, paperback, and kindle.