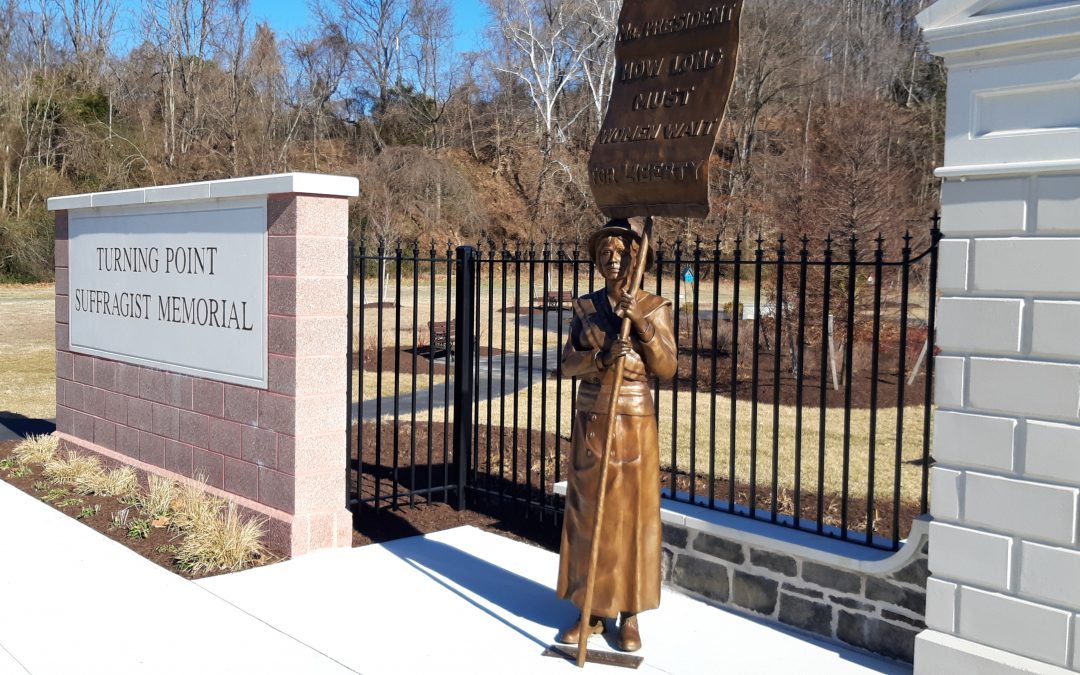 A new memorial has been built on the northern bank of the Occoquan River, near the Workhouse Arts Center and the former Lorton Reformatory. When the prison was known as the Occoquan Workhouse, it was the site of the Night of Terror, a turning point in the suffrage fight.

According to Washingtonian, suffragists were imprisoned for picketing the White House during the presidency of Woodrow Wilson. In the Workhouse, they were subjected to violence and inhumane conditions. All for making a simple request: The right to vote.

Called the Turning Point Suffragist Memorial, the installation honors the entire history of the Women’s Suffragist Movement, 1848 to 1920. The memorial covers the long fight for the 19th Amendment, which finally granted women the right to vote. Statues of suffragists and replica White House gates are part of the memorial.

From prison to park

In my mystery novel Windows of the Heavens, a Methodist pastor named Harley Camden met a witch named John Jonas on the north side of the Occoquan River. John tapped the tip of his walking stick on to the road a few times, and then said, “I’m just finishing a hike through the Occoquan Regional Park. Have you been there?”

“Interesting place,” said John. “Used to be a prison, you know.”

“Yes, I have seen the old buildings on top the hill, the ones turned into the arts center.”

“Well, that’s just part of it. You know, down on the river, the dock on the northern bank? That is where prisoners used to be dropped off, after being transported by boat from DC. Hard to escape from a boat in the middle of a river.”

“Huh,” said Harley. He had cruised past the dock many times but didn’t know its history. “I guess that’s where you get the expression, ‘sent up the river.’”

“Exactly. And the prison is where suffragettes were imprisoned, after they protested for the right to vote.”

“Some were even beaten.”

“Yes,” said John. “When they were first taken to the workhouse, they were clubbed. One was thrown into a dark cell and she hit her head, which knocked her out. Her cellmate thought she was dead.”

“They called it the ‘Night of Terror,’” said John, “and it galvanized support for the cause.”

“That makes sense,” Harley said, thinking of Civil Rights workers being beaten and thrown in jail in the 1960s. “Sometimes a great injustice can advance the cause of justice.”

“But the suffering continued,” said John. “Rats ran in and out their cells. The women had no privacy. It was like they were being kept in a zoo, with U.S. Marines standing guard.”

“All because they wanted the right to vote.”

“Which they got,” John said, “three years after the Night of Terror. It’s amazing how people are imprisoned in one generation for something that seems so noble in another.”

This witch is thoughtful, Harley realized. More reflective than I expected him to be.