The Past Is Never Dead 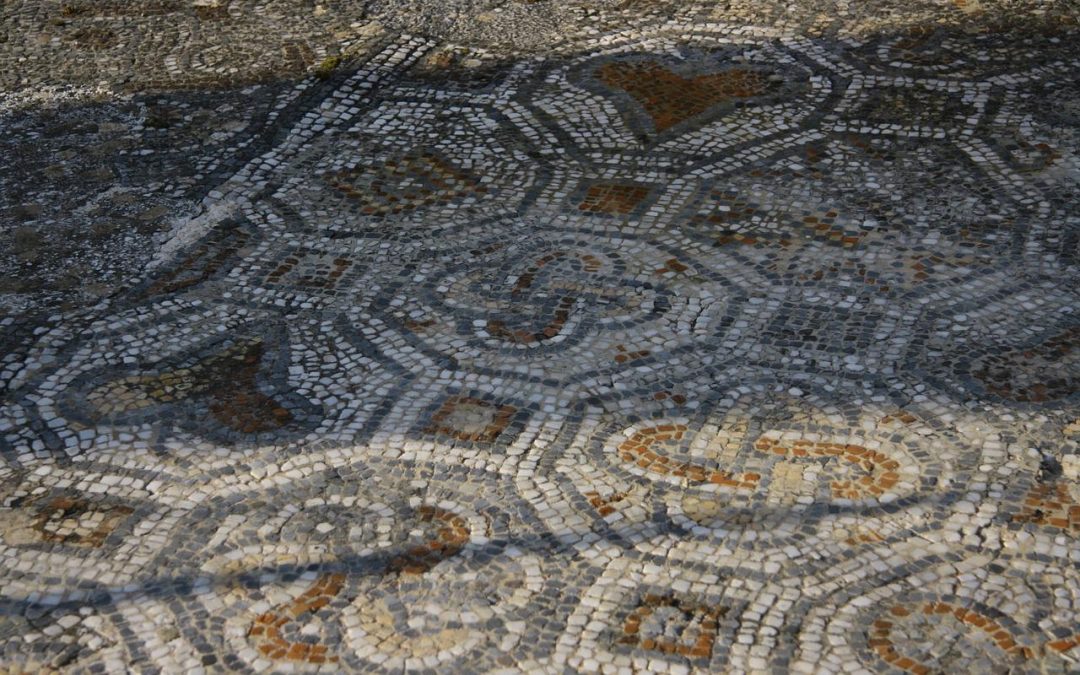 “The past is never dead,” said William Faulkner in his novel Requiem for a Nun. “It’s not even past.”

He was right. The past emerged several months ago in London, when a well-preserved Roman floor was discovered under the streets. Experts consider the mosaic — more than 1,500 years old — to be a “once-in-a-lifetime” find.

According to Newsweek, archaeologists from the Museum of London Archaeology (MOLA) were digging in the capital city, near the tallest skyscraper in the United Kingdom, “The Shard.” They unearthed a highly decorated floor that is the largest piece of Roman mosaic that has been discovered in London in more than fifty years. Archaeologists believe it dates back to the late second or early third century AD.

The floor was part of a large and lavish dining room known as a “triclinium,” and it appears that the building was in use for considerable time. The Romans established the town in 43 A.D., calling it “Londinium,” and they stayed for 400 years. An almost identical mosaic design was discovered in Germany, suggesting the same artist worked in both locations.

“It has been a privilege to work on such a large site where the Roman archaeology is largely undisturbed by later activity,” said MOLA site supervisor Antonietta Lerz; “when the first flashes of color started to emerge through the soil everyone on site was very excited!”

Amazing that the Roman mosaic was undisturbed by hundreds of years of activity in busy London. The past is never dead. It just waits to be discovered.

The Mona Lisa of the Galilee

A similar find was made in 1985 in the Galilean city of Sepphoris. In my novel City of Peace, a Methodist pastor named Harley Camden participated in that archaeological dig, and then talked about it years later in a sermon to his congregation in Occoquan, Virginia.

“When I was a divinity school student,” Harley said, “I spent a summer doing an archaeological dig in Galilee. I worked in a town called Sepphoris, which is next door to Nazareth. We found a mosaic of a beautiful woman that has come to be known as the Mona Lisa of the Galilee.” As Harley pictured the mosaic, he thought of a young women in town — maybe she was the Mona Lisa of Occoquan. Shaking off the thought, he returned to his sermon.

“The important thing about Sepphoris is that it was a community in which Jews and Romans lived together in peace. They didn’t fight one another, even though Jews in other parts of the country had been involved in violent revolts against the Roman Empire for many years. Instead, Jews and Romans lived as neighbors and did business together. Some may have even had romantic relationships — we found some evidence of that in Sepphoris.”

The past is never dead. It has lessons to teach us today, as we try to find peace in our fractured and polarized society.

Message from the Mayans

In the sequel Windows of the Heavens, Harley Camden remembered another dig he worked on as a student. This time, he was in the Mayan ruins in Copán, Honduras. The sky was clear and blue, and the sun was powerfully bright, a blazing diamond in the heavens. He and a group of students were touring the ruins and inspecting the hieroglyphic writings.

Professor Larry Baker asked them to examine one carving very carefully and make a guess as to what it meant: Coronation, military victory, harvest celebration, sacrifice to the gods, birth of a prince? Harley knew that the temples of Copán had traditionally been thought of as a center for religious ceremonies, with only priests living in the city center. The figures depicted in the art were linked to gods and priests, and the hieroglyphic writing was connected to astrological observations and a system of prophecy. But Baker thought that there may be another way to understand what was going on in Copán.

“What if this is not a god or a priest?” he asked the group. “What if it is a carving of an actual ruler of Copán, remembered in art in the same way that the pharaohs of Egypt were memorialized?”

The group stood in silence, reflecting on his question. A Guacamaya extended its wings and cried out from a nearby tree. “What if this is the picture of the president,” said Baker, “on the front page of The New York Times?”

For too long, thought Harley, we have made distinctions between religion and history. But what if the truth requires both?

What if these carvings from the past have a message for us? What if the destruction of Mayan civilization can teach us how to avoid similar devastation today?